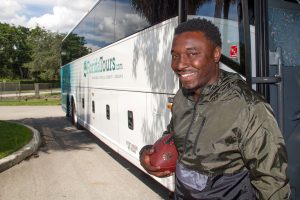 Coaches and athletic directors know that what happens off the field is often nearly as important as what happens on the field. Things like having a winning attitude, a cohesive team sensibility, and even clean uniforms often are enough to push a good team over the edge so that they can become a great team or even the champion.

If you expect greatness, you have to deliver excellence. And that includes everything from the food you provide to your players to the quality of the athletic field and training equipment.

That winning attitude even extends to the motor coaches you hire to transport your team to the big game. When you train all season, instill confidence in your players, and create the expectation of winning … all that can go out the window if you drive your team to the most important game of the season in the same broken-down old school bus.

Players know when they have the support of their coaches and athletic departments … and when they don’t. If your team feels like you don’t value them, they aren’t going to play to their fullest potential. That’s especially true if the other team pulls up in a better charter bus than theirs.

But when you book a luxury charter bus from FloridaTours.com for your team’s away games, they will know that you believe you consider them to be the champions they are.

Losers don’t care what kind of bus they ride in. For second-place teams, second rate tour buses are just fine. But to winners like you, everything matters.

That’s why if you want your to have the winning attitude and that warrior mentality, you need to invest in success by hiring a luxury charter bus from FloridaTours.com, the ride of champions.